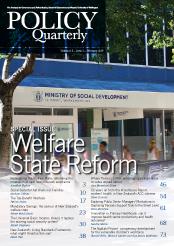 Reform of the welfare state is currently one of the most pressing issues in New Zealand policymaking. For as long as it has existed, the welfare state has been controversial. But the current calls for its reform seem to have extra urgency. Accordingly, this special issue of Policy Quarterly is devoted to welfare reform. The contributions are necessarily broad-ranging, partly because so many different values are at play. As is evident from the depth and breadth of these articles, the potential for reform of the welfare state is enormous. Given its equally enormous importance to the well-being of citizens and the good of society, it can only be hoped that policymakers are ready to take up the challenge.